Kazuha has a calm demeanor, but don’t let that fool you. With the recent buffs to elemental mastery, his entry to the Genshin Impact character roster couldn’t be more perfect. Delivering a mini Venti burst and an elemental burst that melts shields, this samurai is ready to shred and chill!

Kazuha is a strong and flexible sub DPS. He can group enemies with his elemental skill and his damage is not bad either. He can also give your party an elemental damage bonus which is very good if you’re running a team with only one element, such as a full pyro team.

This doesn’t mean that Venti or Sucrose is going to be replaced by Kazuha in every team composition. There are teams where it would be much preferred to have Sucrose than Kazuha, such as vaporize and melt compositions where Sucrose’s passive helps the other members of the party.

While Venti is easily the strongest Anemo sub DPS character, if you’re having trouble hitting enemies inside his elemental burst, Kazuha’s elemental skill does the same thing but in a shorter fashion and a much lower angle.

An example of a team composition you can run with Kazuha is a Keqing electro-charged team. This team has Keqing as its main DPS while Kazuha acts as a sub DPS together with another hydro character, preferably Xingqiu. Assuming that Keqing is built as an electro DPS instead of a physical DPS, Kazuha’s Ascension 4 passive gives this team the damage boost it needs as every electro swirl buffs Keqing’s electro damage while clumping small enemies with his elemental skill.

What are Kazuha’s Talents?

Kazuha’s talents are all pretty good so we’d recommend keeping them all at the same level. However, if you’re building Kazuha’s elemental mastery with little to no attack, it’s safe to leave his talents at level 1 and focus on maxing out his level.

Unleashes a secret technique as fierce as the rushing wind that pulls objects and opponents towards Kazuha’s current position before launching opponents within the AoE, dealing Anemo damage and lifting Kazuha into the air on a rushing gust of wind.

The signature technique of Kazuha’s self-styled bladework — a single slash that strikes with the force of the first winds of autumn, dealing AoE Anemo damage.

The blade’s passage will leave behind a field named “Autumn Whirlwind” that periodically deals AoE Anemo damage to opponents within its range.

If Chihayaburu comes into contact with Hydro/Pyro/Cryo/Electro when cast, Chihayaburu will absorb that element and if Plunging Attack: Midare Ranzan is used before the effect expires, it will deal an additional 200% ATK of the absorbed elemental type as damage.

This will be considered plunging attack damage. Elemental absorption may only occur once per use of Chihayaburu.

Upon triggering a swirl reaction, Kaedehara Kazuha will grant all party members a .04% elemental damage bonus to the element absorbed by swirl for every point of elemental mastery he has for 8 seconds.

Bonuses for different elements obtained through this method can co-exist. 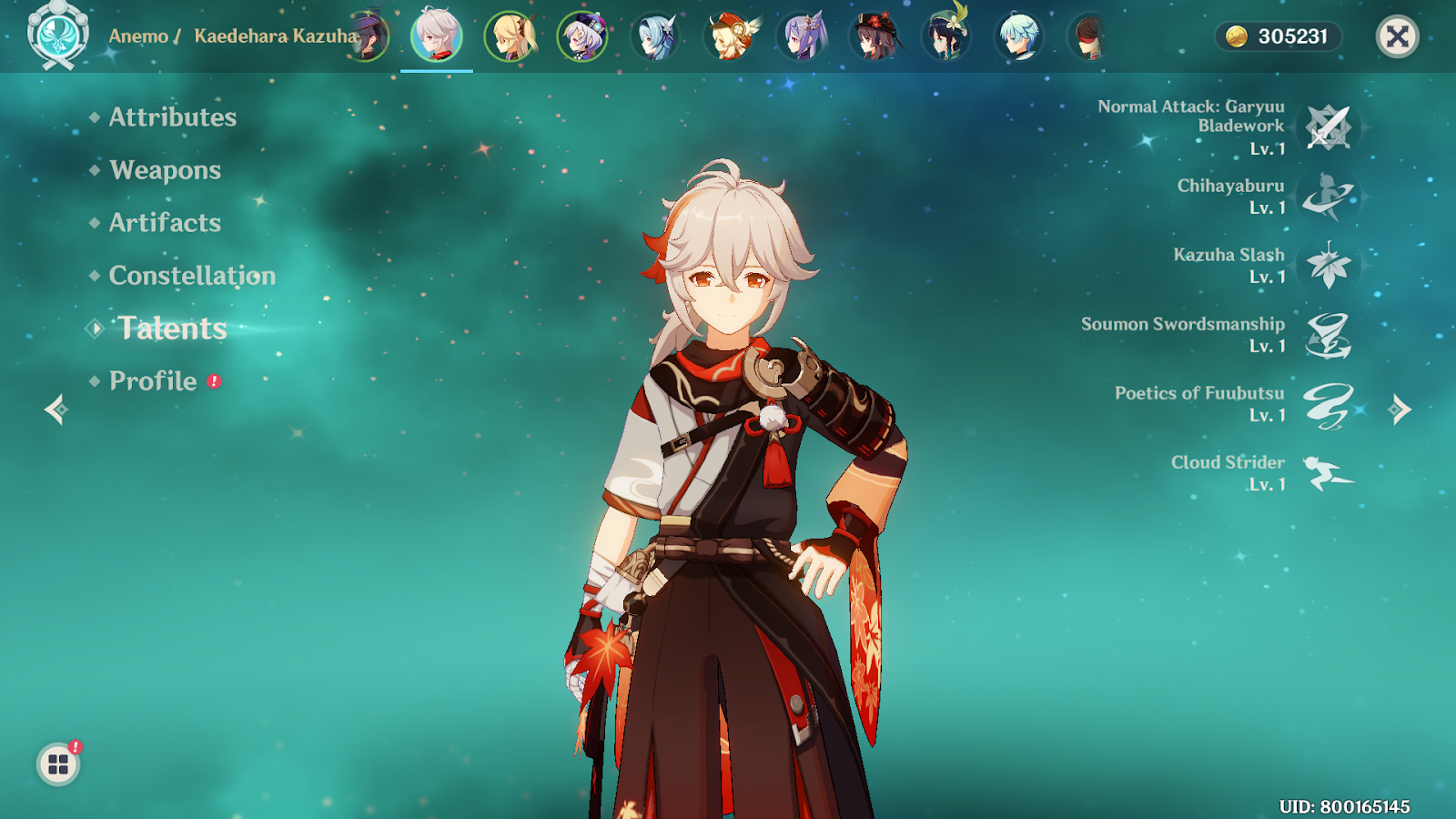 What are Kazuha’s Constellations?

Kazuha’s constellation, like other characters, provides significant changes to him. His C1 and C4 deal with his energy recharge problems. His C2 gives him a massive elemental mastery buff and his C6 puts a main DPS Kazuha discussion on the table with the damage bonus it offers from every point of elemental mastery and the Anemo infusion. However, keep in mind that this infusion can be overridden.

The autumn whirlwind field created by Kazuha Slash has the following effects:

Increases the elemental mastery of characters within the field by 200.

The elemental mastery-increasing effects of this constellation do not stack. 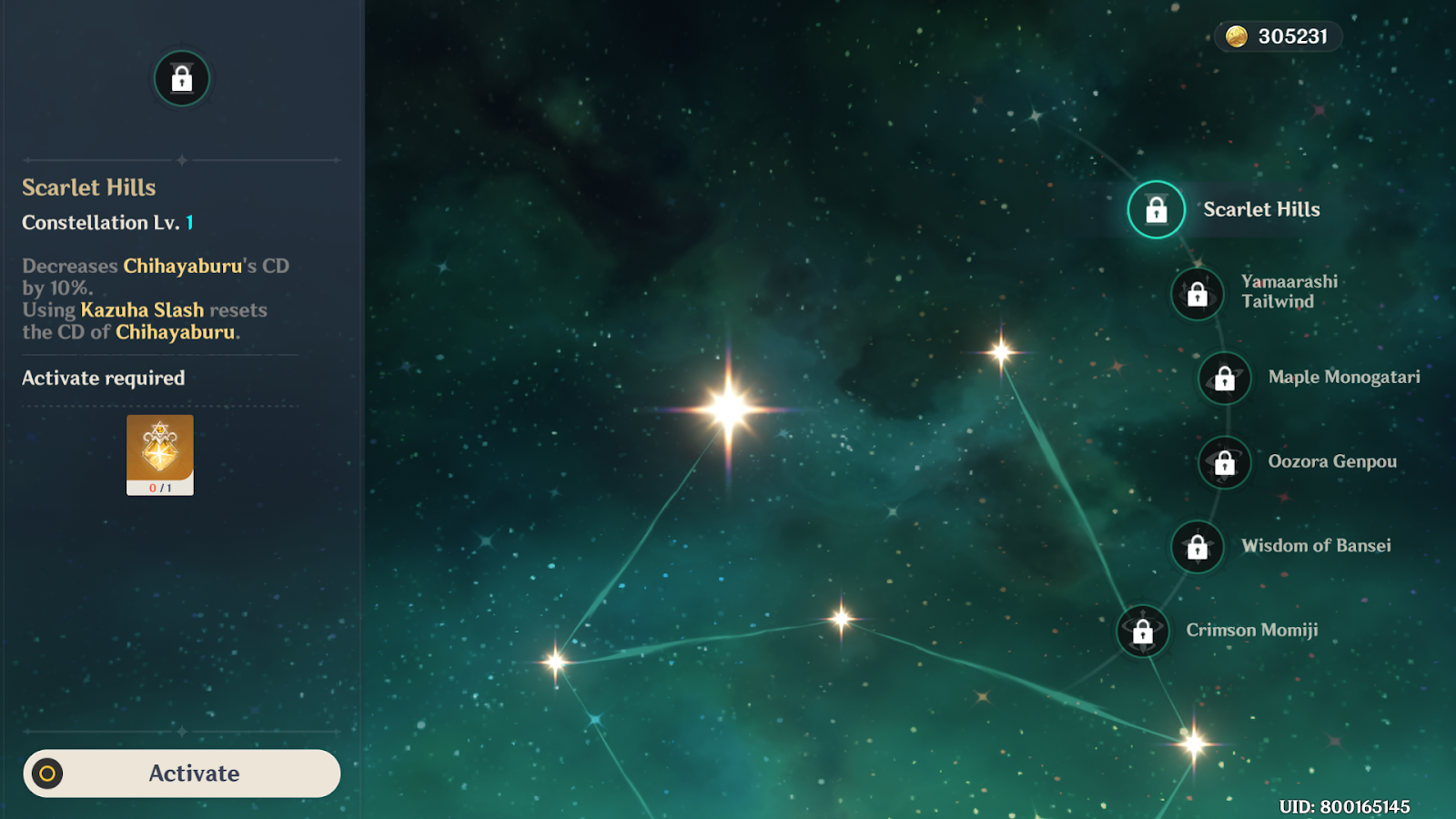 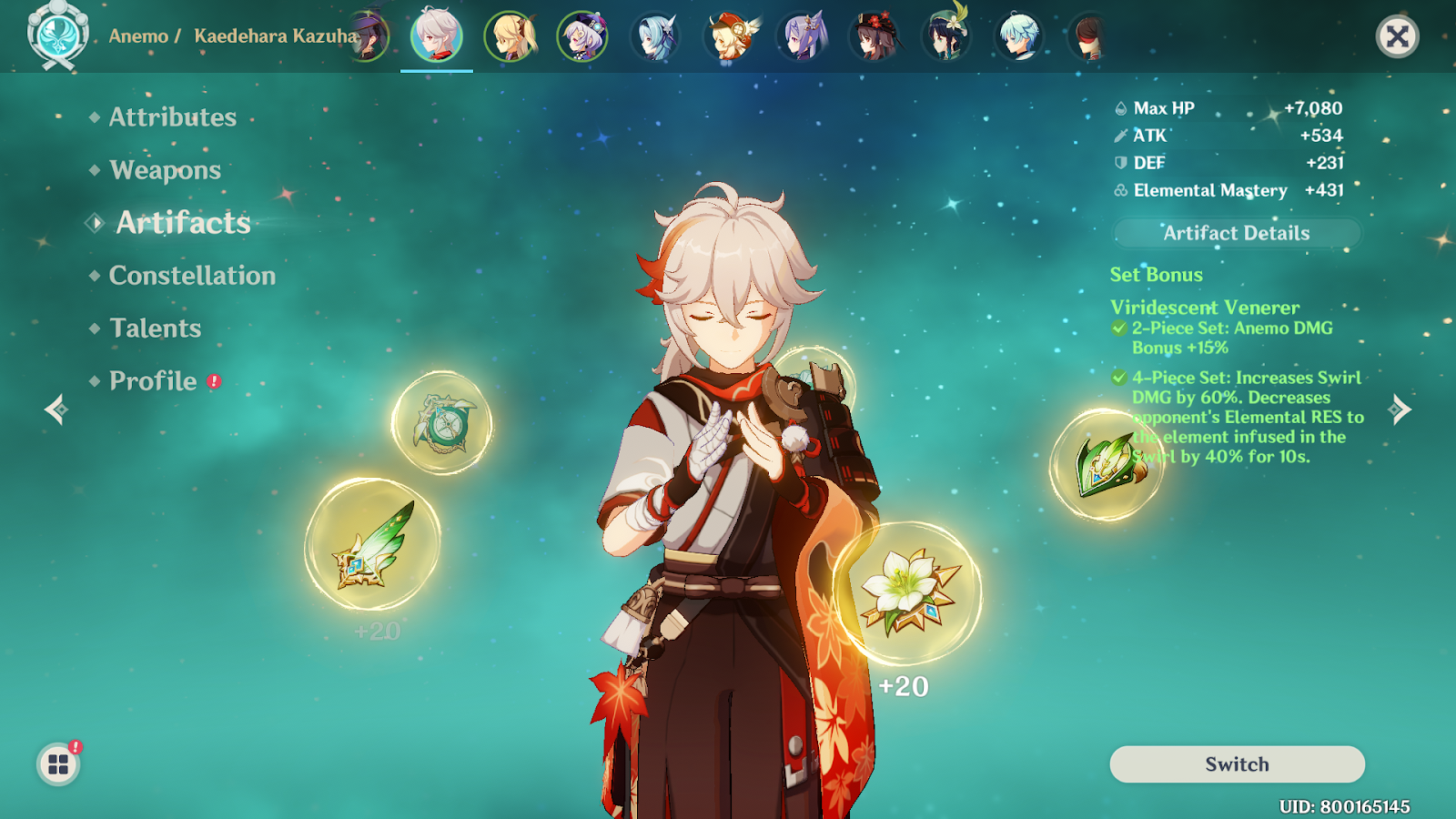 To wrap things up, Kazuha is a very solid addition to Genshin Impact. Kazuha presents players with another sub DPS/support Anemo option. Choosing between Kazuha, Venti, and Sucrose can make the difference between dealing good damage and great damage. With Sucrose, you’d want a team that focuses on elemental reactions, as her passive buffs the elemental mastery of her party members. Meanwhile, Kazuha thrives on a team composition that focuses on an elemental carry that can consistently deal damage like Diluc, Klee, or Keqing.

A quick swap team also exists, if that’s your jam. This kind of team focuses on rotating between party member’s elemental skills and bursts. A common quick swap team with Kazuha is Venti, Xiangling, and Bennett. Similar to his role in other teams, Kazuha’s passive buffs the swirled element (which is pyro in this composition), while Venti provides the much-needed energy refund.

Cedric Pabriga is a freelance writer for IGN. He spends most of his day listening to music or playing video games. He also writes short stories in his spare time. You can follow him on Twitter @IchikaRika.

The Elder Scrolls Online heads to Markarth in its next DLC